Kent has years of experience negotiating, litigating, and fighting for his clients, both inside the courtroom and out. Kent brings this same determination and fights for injured clients every day with the Flora Templeton Stuart Accident Injury Lawyers.  He is a member of the Kentucky Bar Association.

“My passion is helping the injured.” Kent continued his education at The John Marshall Law School in Chicago, IL, where he received his Juris Doctorate in 2010. While studying law, Kent clerked for the Hopkins County Attorney’s Office as well as Cook County State’s Attorney’s Office. During his time practicing law in Chicago, Kent worked for several Fortune One-Hundred businesses and was involved in numerous high volume corporate litigations. In 2015 Kent accepted a position with the Kentucky Department of Public Advocacy, moving back to Kentucky to be closer to the family. Kent gained a valuable experience and developed a strong passion for serving indigent clients who needed professional guidance. Kent excelled academically in high school and continued his education at the University of Louisville. During his time in college, Kent clerked for the Kentucky Commission on Human Rights and developed a strong passion for the law and for helping those in need. While working at the Cook County States Attorney’s Office in law school, Kent held a special license allowing him to practice law under the guidance of an Assistant State Attorney, gaining valuable court room experience. After working in the corporate sector, Kent partnered with another attorney to open their own criminal defense practice. During their practice, Brown Zeller, LLP successfully and aggressively represented their clients, winning numerous motions and bench trials. 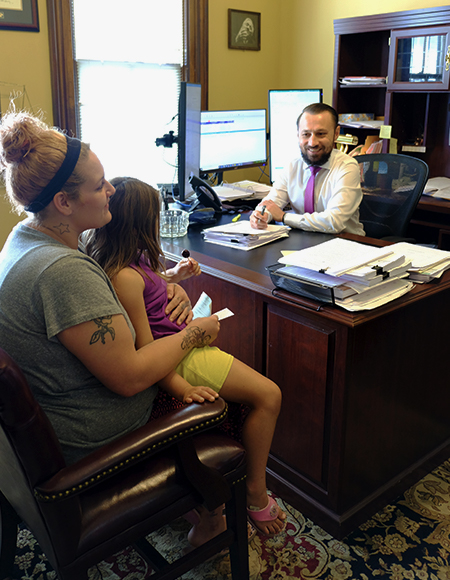 We Serve
Our Community